The Appleby Tennis Club is located on 4348 Longmoor Drive behind Pauline Johnson Public School in Burlington, Ontario. We are a summer tennis club and are open from April to October (weather permitting).


2016 marks the 50th Anniversary of the founding of Appleby Tennis Club.


The Club was started in 1966 by Hugh Johnson using 2 tennis courts at the Appleby United Church on Spruce Ave near Tuck. Hugh was a member of the Church Choir at the time, and since the courts were not being used, Hugh asked the church minister for permission to start a tennis club - he received an enthusiastic reply. They advertised and got started with 38 members that year. An adult membership cost $5. 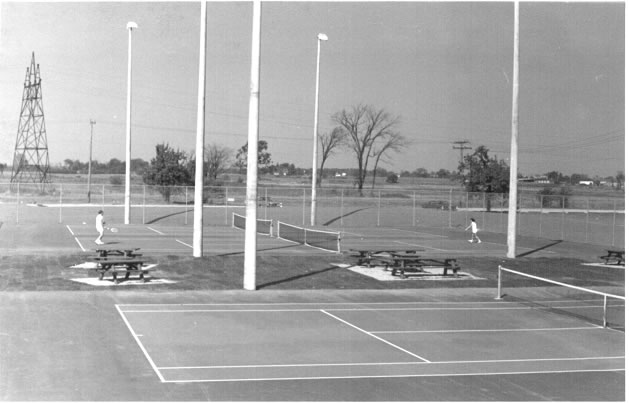 In 1968, Hugh was approached by the City of Burlington’s Recreation Department with a proposal to move the Club to Nelson Park. The proposal included assistance with funding.


Hugh’s friend, Brian Sexton, who had joined the club in 1967, helped with the design of the layout of the club. This included all the specifications and drawing necessary for quotations to build the courts and later the clubhouse.


In 1969 the four new courts (1, 2, 3 & 4) were completed at the present location in Nelson Park. Intermediate lighting was installed on 2 of the courts. Membership was 227. The new courts were official opened on July20th by Mayor George Harrington.

In 1972 courts 5 & 6 were constructed. Fencing and court lighting were installed, and lighting was improved on the other 4 courts. Water supply, storm & sanitary sewers were installed in preparation for the future clubhouse which would be built the following year. Membership was 650.


In 1973 the existing clubhouse was constructed. Incidentally, the original site plan also included 2 squash courts and a 20' x 40' swimming pool – these, of course were never built. The official opening of the clubhouse was held on 12 August, 1973.


Hugh Johnson as founder of the Tennis Club had a Trophy named after him and both Brian Sexton and Hugh were awarded Life Membership for their work in building all the new facilities.